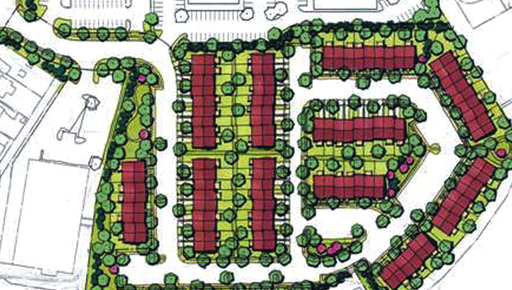 The approved design plan for The Townes at North Point calls for 108 townhomes on the 11-acre former North Point Drive-In site.

St. John Properties, Inc. announced the sale of most of the former North Point Drive-In site on North Point Boulevard to homebuilder K. Hovnanian Homes for $2 million last week.
The sale of the 17.5-acre property took place on June 18.

Based in Red Bank, New Jersey, K. Hovnanian Homes is one of the largest homebuilders in the U.S., with properties in 16 states and Washington, D.C.  St. John Properties, which purchased the site from former owner Durkee Enterprises in 2007, will retain two adjacent sites (totaling 6.5 acres) for retail development.  The Baltimore-based developer announced plans to construct a 10,000-square-foot retail building on one of the two sites, located next to the Burger King at North Point Boulevard and Old Battle Grove Road.
Possible tenants for this new retail building could include a pharmacy as well as fast food and casual restaurants, medical facilities and financial institutions.  The remaining 11-acre portion of the former drive-in site will be developed by K. Hovnanian into The Townes at North Point, a 108-unit upscale townhome community.

“After considering numerous configurations for this site, which functioned as among the last remaining drive-in theatres operating in the state, we concluded the best use existed in a residential environment complemented by retail amenities,” Jerry Wit, senior vice president of marketing for St. John Properties, stated in the press release.  Of the company’s decision to sell to K. Hovnanian, Wit added, “We searched for a company that we are confident will execute a residential program that most effectively meets the emerging requirements in eastern Baltimore County.”
Opened in 1948, the North Point Drive-In closed for good in 1982.

The location housed an outdoor flea market in recent years before being sold to St. John Properties in 2007.  At the time of the sale, St. John Properties announced its intention to develop retail businesses, including a big-box store, at the North Point Boulevard location.
After more than a year and a half of searching for interested tenants, a Burger King was built on the site in 2009.  St. John Properties brought in Glen Burnie-based Craftsmen Developers LLC in 2011 to turn the remaining 11 acres into a townhome community.  According to W. Dennis Gilligan, founder and president of Craftsmen Developers, his company was originally tasked with securing rights and approvals to develop the site.  To this end, the Baltimore County Council approved a resolution in March to allow a planned unit development (PUD) at the site.

Now that approval for the project has been secured, Craftsmen Developers has sold its stake to K. Hovnanian Homes.  It is K. Hovnanian that will actually construct the 108 townhomes planned for the former drive-in.  As Gilligan told The Eagle last week, “It was always our intention to sell developed sites to a national homebuilder.”  Gilligan noted the fact that a national homebuilder such as K. Hovnanian has purchased the site is an “indication and endorsement of a dramatically improving housing market in Baltimore.”

While Craftsmen Developers has sold its stake in the site, the company never actually held the title to the property, thus the title was conferred directly from St. John Properties to K. Hovnanian Homes.  Craftsmen Developers will stay on in a limited capacity to assist with administrative and development processes, Gilligan said.  Designated as a PUD by Baltimore County, the new development will be built in accordance with a county-approved design plan, also known as a “pattern book.”
As St. John Properties said in the press release issued last week, the pattern book “includes details that mandate a specified amount of exterior brick on each townhome, generous windows integrated on the end units, reserved open spaces for residents and convenient ingress and egress access points for the community.”  While St. John Properties is looking to develop the site, Wit said the company remains committed to serving the local area and its residents.  “St. John Properties remains extremely sensitive to the rich and storied history of the former North Point Drive-In and, together with K. Hovnanian Homes, we pledge to become active and involved in the local community,” Wit said. “We also intend to develop retail product that local residents will be proud to support.”  Construction on The Townes at North Point is expected to begin by the end of the year.