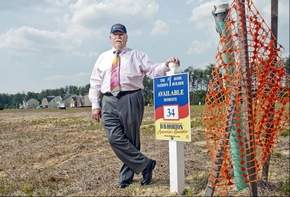 W. Dennis Gilligan, green development is not just a buzzword.

The president of Craftsmen Developers in Glen Burnie said he strongly believes that housing developers can improve the environment by creating sustainable projects. It’s better for private industry, rather than the public sector, to take the lead on that, he said.

“If the industry doesn’t take control of its destiny, then the government will,” said Gilligan, 64. “Everyone is talking about being green, but there are only a relatively few number of people who can demonstrate that they are doing this kind of development.”

Craftsmen recently won its second four-star Green Land Development Certification under the National Association of Home Builders Research Center’s National Green Building Standard. The group recognized the company’s work in the first phase of Coldwater Reserve, a 50-home community in Severn, citing aspects such as access to mass transit and the Severn Run Natural Environmental Area, along with the retention of wetlands and forests to maximize green space.

“Our use of innovative technologies for stormwater management treatment was an important factor,” Gilligan said. “We are the only developers with this four-star certification on the East Coast.”

Family businessBorn in Yonkers, N.Y., Gilligan moved to Pasadena when he was 12. His father was in the homebuilding industry and had a good opportunity there.

Gilligan didn’t want to go into the business, and he majored in economics and urban studies at the University of Maryland, College Park.

“I went to college to escape the family business,” he said. “My first job out of college was with Washington Homes. That’s when I found out that the best education that I received was from my father.”

His three sons, Conor, Morgan and Evan, have worked for his companies at some point. Mixing family and work can be both rewarding and challenging, he said.

“If you have the right compatibility of interests, you can make it work,” Gilligan said. “But it obviously doesn’t work for everyone.”

After working for Washington Homes and Pulte Homes, he founded Gilligan Development in 1983, building it to a $50 million company by the time he sold it to Technical Olympic USA, a publicly traded homebuilding company in Florida. He worked as an executive for Technical Olympic for several years, then founded Craftsmen in 2007 with son Conor and business partner Bob Schultz.

Besides environmental sustainability, community involvement is a core belief of his business, Gilligan said. He is a board member of Hospice of the Chesapeake and has sponsored a fundraiser for that organization known as “Gilligan’s Island Exotic Car Show,” sanctioned by the Ferrari Club of the Mid-Atlantic Region at his property in Pasadena.

This year’s show, slated for June 21, features Lamborghinis, Maseratis, Ferraris and Moto Guzzi motorcycles and will benefit the local chapter of the Home Builders Association of Maryland. Other Craftsmen executives are involved with similar organizations.

“I’m in awe of his innate ability to seek and implement creative solutions based on his extensive business experience to benefit not only the organization, but also the patients and families we serve,” said Michael S. McHale, president and CEO of Hospice of the Chesapeake. “He is a role model for all board members to follow by serving where he can be the most impactful.”

The housing industry still is challenging, but Gilligan said the market has improved from a year ago.

“Sales prices are increasing,” he said. “We are moving to a sustainable recovery.”

The company’s projects span Maryland, from a 75-townhouse complex in Frederick to single-family developments in White Marsh and La Plata. This month, it announced it will start work in late 2013 on a 108-townhouse community in Dundalk.

“It helps clear the cobwebs,” he said. “Golf is too frustrating for me.”