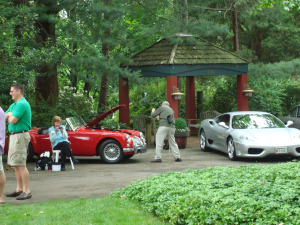 Friday
29
May
Dennis Gilligan, Ferrari, Hospice of the Chesapeake

As a first annual FCA-MAR sanctioned event to be held for the local Hospice center in nearby Chesapeake Bay region, the intimate function “Gilligan’s Island Ferrari Club Exotic Car Show to benefit the Hospice of Chesapeake” boasted quite a few spectacular Ferrari cars in addition to a fine assortment of high end luxury vehicles and other state of the art exotics. Show cars of note included a vintage Ferrari Dino, a Ford GT, and a Ferrari Super America.

Attendance numbers neared 200 guests, with 100% of the $45 per person ticket proceeds going to the Hospice Center to help fund their programming. Car show attendants were also treated to imported beer, bubbling champagne, and Cohiba cigars (all compliments of the gracious hosts), with visitors able to browse through cars and on site vendor art.

Craftsmen Developers leadership instills a “Going Green” culture throughout the company.  Heading forward into the 21st century, son Conor Gilligan, Vice President, is often seen working closely with father Dennis and placed in charge of many of the forward thinking land development projects.  “The culture of caring for the environment is not just a family business approach; we’re committed to thinking multi-generational when it comes to  building in such a way that is environmentally friendly, elevates employee and contractor sensitivity towards the environment, and fosters sustainable development designs in its projects…” says the young up and coming and very professional prodigy.

Craftsmen Developers was the key sponsor for the 2009 Gilligan’s Island Ferrari and Exotic Car Show.  According to the Gilligans, “The Company’s land designs attempt to maximize porous surfaces and limit disturbed areas. They direct civil engineers and consult with local jurisdictions to allow for more flexible “Green Designs”… Craftsmen Developers believes strongly that it can and will improve the environment by creating “Green Neighborhoods”.

As a visitor to their Maryland home and private property for any exotic car show, it becomes immediately apparent that this is a family in which all the business partners practice what they preach.

All the elements of the main house, guest houses, garages, and outlying buildings on the Gilligan estate are laid out in harmony with the coastal wildlife and plants that spare the space with the Gilligan family. Combining modern features with reclaimed wood and stone left over from local restoration projects, the site boasts many of the elemental architectural design features of a Frank Lloyd Wright home while adding curved window lines and built in interior artistic elements that blend seamlessly with the rounded swells of the property’s Chesapeake Bay coast. As a result, the effect is one that claims not only function but superlative form balanced with the natural elements surrounding — making the 5 acre residence a great place to host a fund raiser or private party.

As the event was such a resounding success with guests, get your 2010 daybooks and pens ready. The Gilligans’ expect to set the date for next years and make a public announcement about their intention to again support the Hospice charity some time before the 2009 4th of July celebrations.

The early word from the FCA-MAR board is that they fully expect to support asking the Ferrari Club of American to again lend it’s supporting sanction blessing to the future annual events that will undoubtedly help the guests of the Hospice rest easier thanks to the gracious hospitality provided by the Gilligans and diverse group of 2009 festival attendants.

Until that time, the FCA-MAR group plans to be very busy, with many car shows, special group outings, and road galleries planned throughout the Mid-Atlantic region. The Ferrari Club is an organization that prides itself on being a social organization committed to the promotion of the Ferrari brand and working to help all members of each local community meet their needs. As such, the organization often sponsors worthwhile charities that actively affect their own members residential communities like the Hospice Center of the Chesapeake and the upcoming Children’s Guild “Viva Italia 2009: Concours D’Elegance” scheduled to happen in September of 2009 at the Inner Harbor of Downtown Baltimore’s Harbor East. 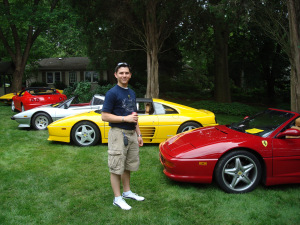 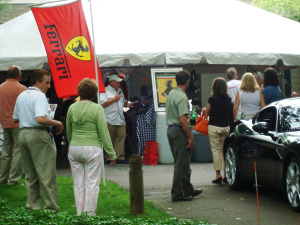