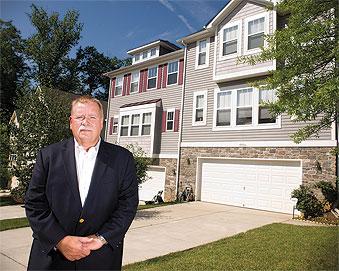 When 62-year-old Dennis Gilligan sold his $50 million company Gilligan Development in 2004, he easily could have retired from his 20-plus-year career in building and development. Instead, at an age when many professionals of his stature are eyeing cushy retirement villas, Gilligan not only embarked on a new business venture, he embraced an emerging niche within the industry.

In May 2007 Gilligan founded Craftsmen Developers LLC with son Conor Gilligan and longtime business associate Bob Schultz. Gilligan chose to operate his new business with a commitment to sustainability and environmental awareness, a decision that helped Gilligan earn the 2009 Lifetime Achievement Award from the Home Builders Association of Maryland. Recently, the Baltimore Business Journal caught up with Gilligan to learn more about the man who managed to dodge his industry’s downturn and reinvent himself as a green builder.

BBJ: Why do you have the job you do?

Gilligan: My dad was a homebuilder. I went to college to get away from the business. Shortly after I graduated, I got right back into it. It was what I knew.

BBJ: When you launched your most recent business, Craftsmen Developers, did you intentionally set out to become a “green” builder?

Gilligan: We didn’t embark on being a green developer per se. We looked at it on a much larger scale. We asked ourselves: How do we look at the industry as sustainable, and conduct business in a more environmentally conscientious way?

BBJ: Speaking of sustainable, what’s your strategy for staying on top during a downturn?

Gilligan: We’ve been somewhat conservative in our approach to land acquisition. We’ve reduced our risks in the way we purchase property. We’ll only purchase land in areas where we believe there’s a sustainable market.

BBJ: How do you motivate your employees?

Gilligan: We have no employees, only owners and associates. By giving the people at Craftsmen Developers a modicum of ownership, they tend to treat their work with the pride an owner would.

BBJ: What are the biggest challenges to your industry?

Gilligan: They’re economic. We’re still in a recessionary environment. Financing is very difficult to come by. There are also environmental constraints. For instance, Maryland recently implemented more stringent storm water management regulations. Some developers look at regulations with disdain. We look at them as a challenge. We’ve already adjusted our way of thinking about land planning and design.

BBJ: What are the biggest untapped opportunities in your industry?

Gilligan: In my second job out of college, I was asked to replace a man three times my age. He left me a note that read: Save your bullets for the big wars.

BBJ: What did you want to be when you grew up?

BBJ: What do you do for fun?

Gilligan: I race a Ferrari Challenge car. My son and I also ride motorcycles together.

Gilligan: Italy. I love driving fast, especially on the Autostrada, which is Italy’s version of the Autobahn. And the back roads there are exquisitely beautiful.

BBJ: What’s something not many people know about you?

Gilligan: I’ve been accused of having two personalities. I’ve been told I’m difficult to do business with. But people who know me socially usually say I’m a really nice guy.

BBJ: When do you plan to retire?